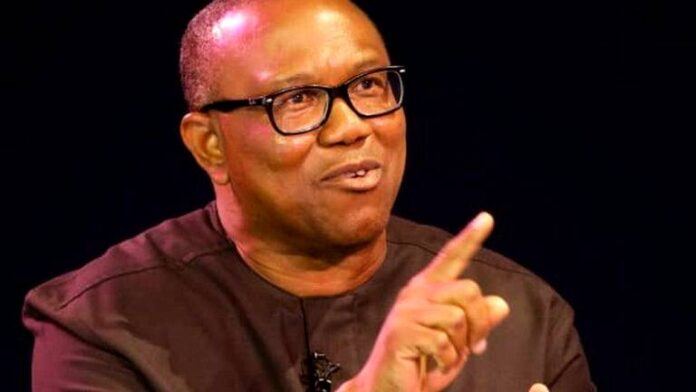 The presidential candidate of Labour Party, LP, Mr.Peter Obi, has restated his commitment to ensure a secured and united Nigeria, just as he said, he would create wealth for Nigerians if elected president in 2023.

Obi made the pledge in Ibadan, Oyo State capital yesterday, during his southeast campaign rally, held at the Lekan Salami Stadium, Adamasingba, Ibadan.

He noted that the unity and security were needed to address problems confronting the nation, including moving of the country from consumption to production.

The LP presidential candidate who highlighted the challenges of the country, which ranged from unemployment, drug abuse and others, added that the challenges could be addressed by prioritising the production

He said: “We must secure and unite the country. When you secure the country, you are able to bring famers to return to the farm. That alone will start addressing food inflation.”

“By moving the country from consumption to production you are moving people away from poverty. The more you pull people out of poverty, the more you address criminality.”

“Nigeria now has 13.8 per cent drug prevalence against the global average of 5 per cent. To deal with that crisis is production. We need to feed ourselves.”

He noted that Nigeria was not short of ideas to bring solution to anything, but what was lacking was institutional framework and political will to implement the ideas.

Obi said Nigeria could achieve whatever it wanted with true implementation of its great ideas, while urging Nigerians to look at the antecedents of the eighteen presidential candidates on the ballot before casting their votes in 2023.

He charged that voting should not be done by religion or by tribe, but by the capacity of the candidates to address prevailing challenges.

“Next year’s election should not be based on tribe. If it is by tribe the north would have been safer and be more developed.”

“Yes we must all respect the issue of religion, but even at that, we should not follow people blindly because of religion.”

“We cannot use the process of yesterday or those who did not solve it yesterday for tomorrow.” he said.

Obi said also that if elected, he would be in-charge of the country with the required energy and mental requirements.

He also promised to address increasing debt profile of the country as well as engage youths in addressing the problems of Nigeria.

“The job of Nigeria president requires physical and mental energy. I will make sure that Nigeria works. In our country people don’t do what is expected, they do what is inspected. I will be there. I want to hire energetic men and women to start solving these problems.”

“I want to pull young people with so much energy and talents. I want to invest in them because they can change the world. That is what I want. I believe I can solve these problems,” he stressed.

Obi also pledged to fight corruption and make the education sector to work.

Earlier, the Afenifere leader, Chief Ayo Adebanjo, said in the spirit of fairness, it should be the turn of the southeast to be the next president in line with the agreement of reached by past Nigerian leaders.

He stated that there is an agreement made in 1954 that each geopolitical zone should produce president, while they operate as a regional governments.

According to him, both north, southwest and south-south have produced presidents for the country, while southeast has not been given the opportunity to steer the ship of the country.

While talking about the ambition of the presidential candidate of the All Progressives Congress, APC, Asiwaju Bola Tinubu, Chief Adebanjo, recalled that before he (Tinubu) became the governor of Lagos State, he had supported him on several occasions during his two-term administration.

“When he was the governor of Lagos State, I supported him; I did not hate him then, why will I have the course to now hate him? Adebanjo queried.

“Tinubu cannot confront me on this, but only people that are benefiting from him that are speaking ills of me,” Adebanjo said.

Prices Of Fuel, Bread Jerked Inflation To 17.71 Percent In May

WhatsApp Services Back Hours After Outage