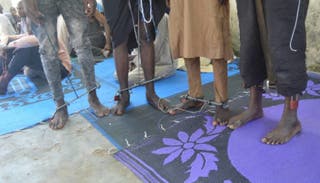 Kano State Police command has uncovered an illegal rehabilitation centre where inmates were chained, tortured and freed 47 of them at the centre located at Yar Akwa in Naibawa Quarters, Tarauni Local Government Area of the state.

This was just as the command arrested two suspects, 35-year Aminu Rabiu and his elder brother, Fatihu Rabiu, over the incident.

The state Police Public Relation Officer (PPRO), DSP Abdullahi Haruna Kiyawa, stated these in a press statement made available to pressmen in Kano on Friday.

According to him, the development came after the police recieved report that one Aminu Rabiu was running an illegal rehabilitation centre where he allegedly chained and tortured the inmates.

DSP Haruna however disclosed that the state Commissioner of Police, Sama’ila Shu’aibu Dikko, immediately raised and instructed team of detectives to proceed to the scene, rescue the victims and arrest the owner of the centre.

He further disclosed that during the rescue operation, 47 inmates were discovered confined in the centre, with four of the victims’ legs chained and some with various degrees of injuries resulting from torture received at the centre.

He added that the inmates were rushed to Murtala Mohammed Specialist Hospital, Kano for treatment and later handed over to officials of the Kano State government.

However, during interrogation, the suspects confessed to have resumed activities at the centre 10 months ago after the initial ban by the Kano State government.

The police command said they would be charged to court upon completion of investigation.

YOU SHOULD NOT MISS THESE HEADLINES FROM NIGERIAN TRIBUNE

We Have Not Had Water Supply In Months ― Abeokuta Residents

In spite of the huge investment in the water sector by the government and international organisations, water scarcity has grown to become a perennial nightmare for residents of Abeokuta, the Ogun State capital. This report x-rays the lives and experiences of residents in getting clean, potable and affordable water amidst the surge of COVID-19 cases in the state…Illegal rehabilitation centre Illegal rehabilitation centre

Taking possession of the document at the presidential villa, Abuja on Friday, he said the country expects nothing less from the Board of Directors, the Chief Executive Officer, and the Chief Finance Officer, “than the realization of a global national oil company that this nation desires and deserves.”

According to a statement issued by Femi Adesina, Special Adviser to the President (Media and Publicity), under the recently signed Petroleum Industry Act (PIA), the Nigerian National Petroleum Corporation (NNPC), was expected to transform to a limited liability company, a fact that has now been accomplished.

The President described the incorporation as “a significant milestone in our quest to create an enduring National Energy Company that can compete with its global peers and deliver value to its shareholders, the Nigerian people.”

He said his expectation was for a speedy transition through taking all steps required to transfer assets, human and material, “and without wasting time to capitalize the company as required by the Petroleum Industry Act.”

President Buhari said he was happy to note that the National Assembly has confirmed his nominations for the Board and Management of the two regulatory institutions, and expects immediate take-off to facilitate effective implementation of the provisions of the PIA “on accelerated gas development and optimization of oil production and support for the energy transition.”

In his remarks, Group Managing Director of NNPC, Mele Kolo Kyari, said the incorporation was “history made again, a massive transformation from what we know, to where we are going,” under the leadership of President Muhammadu Buhari.

He added that lots of values have been delivered in the past six years, “and we still have further accountability and values to deliver.”

Registrar/Chief Executive Officer of the Corporate Affairs Commission, Alhaji Garba Abubakar, said the registration, accomplished within 24 hours, has complied with all requirements of the Companies and Allied Matters Act (CAMA), and the PIA, disclosing that the new company is one with the largest capitalization of N200 billion in the country.

He added that the registration in the short time, “underscores strong collaborations among agencies of government.” 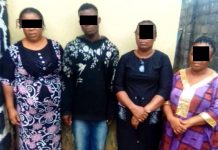 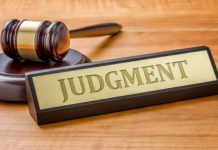 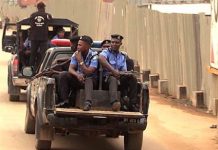 NSCDC officer, 2 others burnt to death in Badagry motorcycles accident

WhatsApp to stop working on millions of phones from January 1...