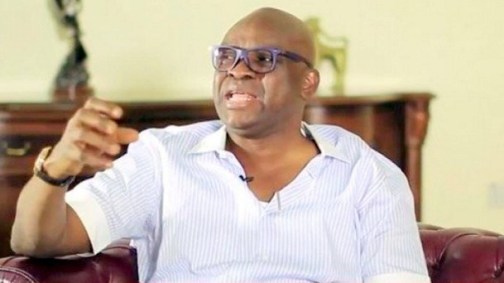 Former Ekiti State governor, Ayodele Fayose, on Friday, asked the Peoples Democratic Party presidential candidate, Atiku Abubakar, and other party stakeholders to do more to unify the PDP in order to win the 2023 elections.

This is as he said Atiku and other party members, including officials cannot deny the contribution of the Rivers governor to the survival of the opposition party after losing the 2015 presidential election to the All Progressives Congress.

Fayose spoke as a special guest at the inauguration of the Community Secondary School, Obuama in Degeme Local Government Area of Rivers State on Friday.

While urging the party leaders to unify the members, Fayose said winning the elections was the ultimate, adding that it was even better to win together.

While noting that Atiku was not against his host, he said many people close to the throne “were enemies of the throne”.

Fayose described Wike as the soul of the PDP, saying prosperity will reward him

He said, “Your Excellency, whatever anybody says about you, prosperity will be on your side. It is a matter of time. When I was governor of Ekiti State, I honour people when they are alive, not when they were dead.

“You have honoured yourself with your handwork. You have shown that it is possible to bring the impossible to bear.

“Rivers State has been there for a long, but today we can see the difference. An average Rivers man is proud to be from Rivers.

“They are proud to say you are their governor. Forget whatever people say about you. I have said it before, Wike, a man with a fierce look, but a good heart. A heart of will, accomplish to love and to support.

Continuing, Fayose said, “They are against you because when you take over, they will fall apart.

“For me, before I come to the commissioning, I want to believe that His Excellency, Atiku Abubakar is not against you. But let me say this very quickly, a lot of people surrounding the throne are enemies of the throne.

“A lot of people around the throne have one axe to grind with somebody or some issue with somebody and they take it where they are not supposed to take it.

“There is no living thing in this party and outside this party that will not acknowledge your contribution to this party.

“You are the soul of this party; even till now what you do how many people do it?

“There was a time in this party when I was a sitting governor, I was a nightmare to the APC and the Buhari Government. I was their nightmare. When you wake up you see Fayose. Today now when put on the Television, it is Wike, Wike. That time as your senior brother, I was a lion.

“Let me say, your good works will never go unrewarded. I have found out a lot of things. The people that have benefitted from you, are the people that push people down.

“We never for one day look at the eyes of the APC or the opposition. But we tell them the fact, we speak truth to power that this is not right.

“A good man in the history of the Bible is always the enemy of the people who don’t like the truth. Continue to do your best, don’t give up. I believe this party will come together.” Fayose said.

The former Ekiti state governor expressed optimism that the needful will be done.

“Wike has not come out to say Atiku Abubakar is not the presidential candidate. I was there the second day after the election when our candidate, the former Vice President visited the resident of Governor Wike.

“We had a mutual conversation. We were all happy. Everything was in place to move forward. I spoke at that meeting. But we don’t want to aggravate the situation.

“I am only appealing to people that matter. In every political party, there will be groupings. The same family, but different interests. We can do better than we are doing.

“People around the corridor of power, please allow this candidate to win the election. We don’t celebrate victory until it is ours.”

Lai: We can’t conduct full-scale bombings against bandits — innocents may be killed

APC To Iyorchia Ayu: You Can’t Be Different From Your Predecessor

NNPC Is The Most Transparent National Oil Company In The World,...