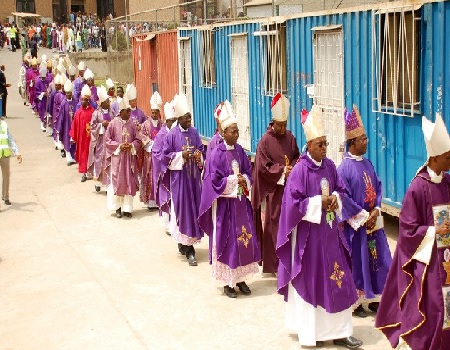 Catholic Bishops from the 16 countries of West Africa have called on the political class to put in more efforts to solve the problems of insecurity, poverty and hunger in the sub-region.

The clerics made the call yesterday at the end of their 4th Plenary Assembly, which held in Abuja with the theme: ‘Fratelli Tutti: Path to build brotherhood and sustainable peace in West Africa.

The clerics made the call yesterday at the end of their 4th Plenary Assembly, which held in Abuja with the theme: ‘Fratelli Tutti: Path to build brotherhood and sustainable peace in West Africa.

Catholic Church applauds Ebonyi public over release of cleric from Correctional Centre
The Catholic Archbishop of Abuja, His Grace Most Revd Ignatius Kaigama, who spoke to journalists, explained that matters of security, well-being of the people, and peaceful coexistence should not be toyed with.

He stated: “We ask our politicians to talk less, but do more. They talk a lot, promise a lot, campaign a lot, but do very little concretely to eliminate the hunger, the insecurity, the diseases, and all that we suffer from.“”They must go from mere talking to action. All the differences, the prejudices, and stereotypes that divide us, we should be able to seriously do something about them.”

He maintained that there was no part of Nigeria and other countries in the West Africa sub-region that did not have its inherent security challenges; urging every citizen to look inwards and eschew evil.

“The problems have not diminished. They are still there, but our collective will to tackle them has not diminished either. When there is life, there is hope.

“We will, therefore, continue to talk, examine, and x-ray the problems before us. With every goodwill and determination, we shall succeed.

“This is what we tell ourselves as Bishops, priests, and all Christians. Let’s do something rather than cry and worry. Let us actively do something concrete..”

He also urged the people to take active roles in building brotherhood in their countries and among humanity, saying it is not just about talk but implementation.

Similarly, in a pastoral message read during the closing mass of the Plenary Assembly, the West African Bishops, under the auspices of RECOWA, noted that human fraternity today is under serious threat.

“We, therefore, call on political and traditional leaders to renew their commitment to working for the welfare and well being of all of our people.

“We appeal to all in leadership, traditional and political, business men and women, public and civil servants, and especially our youth to stand together to defend our cherished values of family and brotherliness, which have always been the bedrock of our African cultures and traditions.

“As Africans, we have always lived for one another. We must rise up now, identify our gifts and use them to build bridges of friendship and love. God, who is the father of all of us, calls us to this,” the pastoral message stressed.

How I was brutalised, arrested – Sowore

NDLEA Poised To Increase Risk Of Drug Trafficking In Nigeria –...