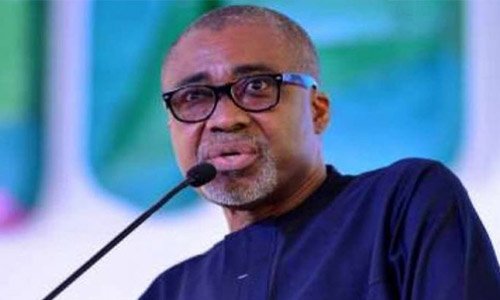 The Minority Leader of the Senate, Senator Enyinnaya Abaribe, has said Peoples Democratic Party members will push for the adoption of the House of Representatives version of the Electoral Act (amendments) Bill 2021.

Abaribe, who spoke in an exclusive interview with The PUNCH on Sunday, explained that the version passed by the Senate on the electronic results transmission was against the constitution of Nigeria.

Asked for his group’s next line of action, Abaribe said the members of the Minority Caucus that would be among the harmonisation committee would push for the adoption of the version passed by the House of Representatives.

Abaribe said, “We are on vacation. The House of Representatives passed a different version from the one passed by the Senate.

“There will be a conference committee. Hopefully, the House version will be upheld since the Senate version offends Section 78 of the constitution.”

Also, the Minority Leader of the House of Representatives, Ndudi Elumelu, has blamed the leadership crisis at all levels in Nigeria on the lack of political awareness and electoral choices of the electorate.

On Thursday, the Senate voted that the Nigerian Communications Commission, with the National Assembly’s approval, would determine whether INEC could transmit results electronically or not.

On Friday, the House of Representatives passed the Electoral Act (Amendment) Bill, maintaining the controversial Clause 52(2) as presented amidst protests, especially by members of the minority caucus.

The clause gives INEC the discretion to determine when, where and how voting and transmission of results will be done.

BBNaija S6: Phyno gave me N300,000 after dancing to his song, says Liquorose

Report: 322 police officers, 642 soldiers — how security operatives were killed in one...

Anambra Poll: Go And Vote Candidates Of Your Choice – Southeast...

EXPOSED: Each rep gets N8.5m every month — aside salaries