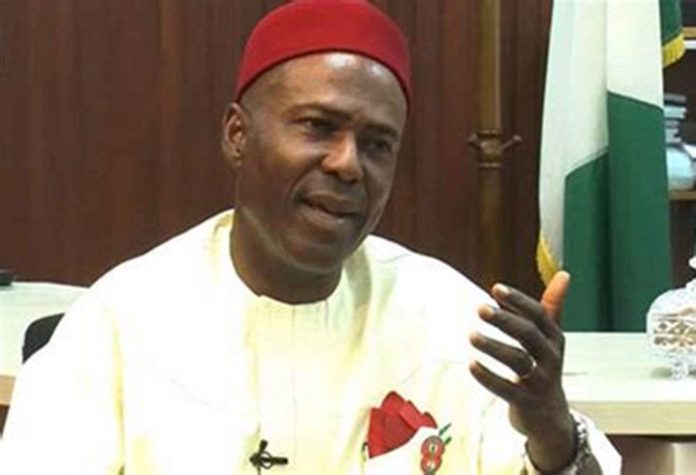 Former Presidential Aspirant of the All Progressives Congress, APC, Dr. SKC Ogbonni has asked President Muhammadu Buhari to openly endorse the Presidential Candidate of the Labour Party, LP, Mr. Peter Obi, as his preferred next president of Nigeria when he draws the curtain on May 29 2023.

Ogbonnia in an open letter to President Buhari said that Mr. President should endorse Obi for many reasons, but for the most reason that Buhari shares prudence and anti-corruption similarity with Peter Obi, which he said was the main reason Nigerians, including himself (Ogbonnia) supported Buhari for President in 2015, adding that integrity, young aged and good health and clear vision are other favourable factors that should compel Buhari to give immediate support for Obi.

He said that even though Buhari and his government derailed in the process of reciprocating the electorates with their expectations, the President should support Peter Obi to continue with the process of taking back Nigeria from the avarice of the Nigeria oligarchy which he accused the 2023 presidential candidates of the APC and the Peoples Democratic Party, PDP, of representing.

Ogbonnia said that placed on the table, Buhari will choose Peter Obi over and above the Bola Tinubu and Atiku Abubakar, noting that Buhari helped to deepen Nigeria democracy by leading the change movement that saw an opposition party capture power at the center for the first time in the Nigerian history.
“We were able to make such a defining history because of your austere and incorrigible pedigree. We believed history had placed you in a position to become the greatest African leader-ever. Unfortunately, fellow Nigerians, including yourself, have found out the hard way: any serious setback from old age or ill-health is not a recipe for effective leadership. Make no mistake: One must not mock old age or ill-health, as these conditions are in most cases beyond human control. Yet, it is a gross disservice to the humankind for politicians who are challenged by either old age or ill-health to knowingly offer themselves for positions where such infirmities can hinder their performance.

“Mr. President, you are a living witness. You have not hidden the fact that the challenges associated with old age do not augur well with the demands of your office. It is not surprising, therefore, that you have not been able to perform to the best of your abilities.

“To make matters worse, the National Leader of our dear party, Bola Ahmed Tinubu, the master strategist, who was supposed to serve as a stabilizing force, is suffering from a similar sad fate. His predicament is even worse. Within the past seven years, he has domiciled in foreign hospitals more than you have done. Needless to mention that his recent public outings do not portray a man who is physically or mentally fit for any serious party leadership.

The cumulative effect is that things have truly fallen apart in our party, as well as Nigeria in general. Today, the level of corruption, which you had declared would kill Nigeria unless Nigeria kills it, is now unfathomable. Today, our party, with Bola Tinubu as its national leader, has become a safe haven for notorious corrupt kingpins who were indicted while at the PDP. Today, our party does not appear to have any ideological, moral, or ethical difference with the much-discredited PDP.

“The most shameless yet is that the APC has nominated the same Tinubu as its presidential candidate for the upcoming 2023 elections. The implication is that corruption has been embraced as a way of life under your very own administration. Common sense dictates that, if Tinubu is to prevail, but may God forbid, you would be handing over to a politician who is not only challenged by the stark frailties of poor health and old age, but also someone who is widely disdained for being one of the most cancerous poster characters for corruption in Africa. Mr. President, if Tinubu prevails, you will go down in history as the most shameless political hypocrite—ever.

“It is necessary to remark here that I do not discount the contributions of Bola Tinubu in Nigerian history. Eulogizing him in a 2017 piece, ‘I pity Tinubu,’ I did not hesitate to write that ‘if dynamic opposition is the life-wire of democracy, it is very fitting then to name him the saviour of Nigeria’s current democratic journey. Tinubu, more than any other Nigerian, nurtured and sustained the opposition movement that removed the Peoples’ Democratic Party (PDP) from power.’

“I must also admit that Bola Tinubu could not have been a candidate you would wish as a successor. You wanted a level playing ground in our party. But the corrupt cabal within the APC took advantage of your condition to outwit you and hand the prize to the highest bidder. Take for example, Tinubu’s Presidential Council, where he hoodwinked you to become its chairman. Look at the kind of re-cycled corrupt characters therein. Mr. President, why are you allowing these characters to further tarnish your image? The saving grace is that the 2023 presidential election presents a golden opportunity to not only redeem your incorrigible legacy, but to also save Nigeria from total collapse.

“The three candidates with the potential to succeed you are Atiku Abubakar, Peter Obi, and Bola Tinubu. On one hand, we can both agree that Atiku and Tinubu are the ‘same ten and ten pence’—the two most influential henchmen of Nigeria’s ageless corrupt oligarchy. In short, to elect any of the two is an errant sin. Please do not have a hand in such a shameless fall from grace. If still in doubt, besides their poor health conditions, please consider that neither of them can in good conscience campaign against corruption. Combine that with the fact that no Nigerian leader, whether military or civilian, has ever assumed the governance of the country with the type of corrupt background well known of Atiku and Tinubu. Think back, Mr. President!!

“On the other hand, we have Peter Obi of the Labour Party. Like you, he is well known for frugal management of resources and has no record of corruption. Like you, he does not buy votes. Like you, he is determined to kill corruption, as you would wish. Like you in 2015, instead of waiting till the Election Day to deploy looted funds to rig elections, Peter Obi has demonstrated the physical ability to traverse the entire country to ask for votes. Luckily for you and Nigeria, unlike you, he is younger and in a better state of health to overcome the unfortunate frailties that hindered your performance. Moreover, he has a clear vision and the character to unleash Nigeria’s abundant potential to greatness.

“Of course, I can relate to the burden associated with promoting a candidate of the opposition party. But as I had stated while equally endorsing Peter Obi, we must not hide behind the bogus toga of political parties, tribes, and religions to allow a crooked clique to dictate our future. I emulated President Olusegun Obasanjo and other progressives, who chose country over party to endorse you in 2015. I took a page from Colin Powell, an eminent American patriot and lifelong member of the Republican Party, who crossed party lines to endorse Barrack Obama of the Democratic Party in 2008. Powell saw Obama as a transformational figure who could inspire a new generation of Americans.

UN: With 1.4bn people, India to surpass China as most populous...