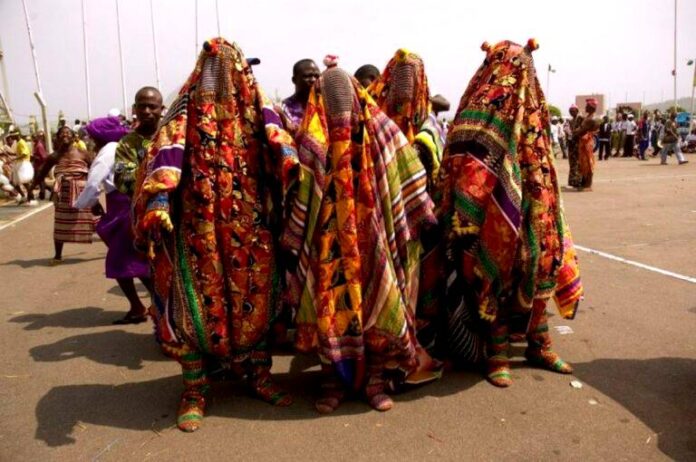 This image is just for illustration purpose only. Not associated with the event
By Dayo Johnson – Akure

Two masqueraders namely Sheriff Ojo and Muhammad Lukman have been arrested for allegedly stealing ₦370,000.00 and inflicting injury with cutlasses on one Adinoyi Mohammed the owner of the money in Ondo state.

According to spokesperson of the State Police Command, Funmi Odulami. the two suspects committed the offence at Melenge Community, at Ipele town in Owo council area of the state.

She said that ” the two suspects paraded themselves as Masquerades, inflicted injury with cutlasses on one Adinoyi Mohammed ‘m’, dispossessed him of the sum of ₦370,000.00, a handset valued ₦32,000.00 and a shirt valued ₦2,500.00.

“They also inflicted injury on the victims father, Saliu Ajayi.

“Two cutlasses, Charms and Masquerade clothes were recovered from them.

“The two suspects had been arrested and will soon be charged to Court while effort is ongoing to arrest the fleeing ones”.

Meanwhile, a 39-year-old scavenger, Badiru lbrahim, has allegedly killed a landlord, Arise lkuesan in Ore, Odigbo council area of Ondo state for disallowing him to pick iron rod from his compound.

Vanguard gathered that the scavenger hit an iron rod on the forehead of the deceased during an argument over the invasion of his privacy without his consent.

He reportedly died as a result of the injuries he sustained in the attack.

Eyewitness account said that the suspect who is now police custody attacked the deceased for trying to stop him from picking iron rod in his compound.

Odulami who confirmed the report said the 45-year-old landlord was attacked by the scavenger.

Odunlami said “On 13th September, 2021, at about 1600hrs, a report was made at Ore Divisional Headquarters that a scavenger, Basiru Ibrahim ‘m’ 39 years old hit an iron rod on the forehead of one Arise Ikuesan ‘m’ 45 years old, now deceased, after trying to stop the scavenger from picking iron rod in his compound.

“Upon the receipt of the information, Detectives swung into action and arrested the suspect who confessed committing the crime.

On the teenage burglars, the police image maker said that Police Patrol Team at Igbaraoke Division, intercepted one Opeyemi Olotu 14 years and Blessing Arohunmolase 17 years, both of Odo-Ode Igbaraoke with Mobile Phones accessories valued at ₦200,000.00.

“During interrogation, they confessed to have burgled the shop of one Olumide Folorunsho, a Phone accessories seller, on 2nd October, 2021, at about 0100hrs”.

Odunlami added that Emmanuel Sunday, aged 11 years, a member of the gang who was formerly at large, had also been arrested.

The police image maker said that the suspects will soon have their day in court. 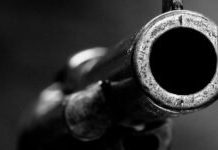 Ned Nwoko not planning to marry soon, not romancing anyone ―...