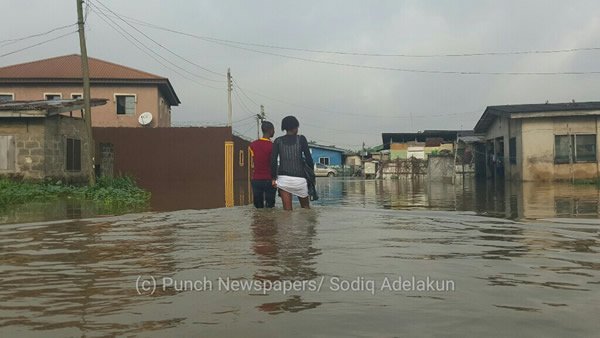 Minister of Water Resources, Suleiman Adamu, on Wednesday, debunked reports (NOT by Channels Television) that Nigeria entered into an agreement with Cameroon to build a dam that will mitigate flooding when water from the Lagdo Dam is released.

The minister stated this in Abuja at the Budget Defence with the Senate Committee on Water Resources.

He said there is no record of such an agreement but while the government is in the process of building the Dasin Dam to mitigate flooding from Cameroon’s Lagdo Dam, there are engineering concerns.

Adamu said Cameroon did not inform Nigeria about the release of water from the Lagdo Dam until 24 hours after it was released.

The minister further said the Lagdo Dam contributes only one percent to the flooding in Nigeria, even though sometimes the water is released without notice.

According to him, 80 percent of the floods in parts of Nigeria are as a result of ceaseless rainfalls.

Floods have hit parts of Nigeria in the last two months with the National Emergency Management Agency (NEMA) saying that about 2.5 million persons were affected and over 603 persons killed by the flooding caused by torrential rainfall of late.

Governor Chukwuma Soludo of Anambra State on Tuesday said Nigeria must have a national emergency conversation about flooding to avert recurrence.

“What is the nation doing to prepare for the next one because we know that it will happen again and again? It has been happening, and Cameroon will soon open the dam in the next one or two years. What is the national plan to deal with the next one? Whether we are going to build dams or embankments along the banks of the rivers. I think as a nation, we need a national emergency conversation,” he said on Channels Television’s Sunrise Daily.

Zoning: PDP not under pressure— Spokesman

PDP delegate spends N6.9m out of ‘money made from primaries’ on orphans

43 Detained In Senegal Over Human Trafficking