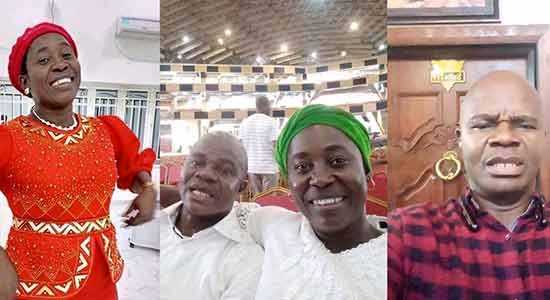 The popular singer died on Friday after allegedly being IN a coma for five days following assault by her husband.

Colleagues and children of Osinachi, who was a lead singer at the Dunamis International Headquarters, Abuja, confirmed the allegations, accusing Peter Nwachukwu of domestic violence and maltreatment.

Nwachukwu was immediately arrested by the police after the younger brother of the deceased singer reported the matter, leading to an investigation.

Speaking from police custody, Nwachukwu said his late wife had been battling an illness since November last year.

He said that he first took her to Federal Medical Center (FMC), later to Gwagwalada General hospital, and then to National hospital, where she died.

He did not say the nature of her illness.

Mr Nwachukwu was led in handcuffs and taken to the house to provide evidence of the hospitals he claimed to have taken his deceased wife to for treatment.

An autopsy has also been carried out on the late singer’s body to ascertain the cause of her death.

It has been reported that Mr Nwachukwu has been transferred to Force Headquarters for further interrogations.

Obiozor’s Home Attack: Arrests Have Been Made, Says Uzodimma

Presidency: Buhari not part of plot to draft Jonathan into race

Igboho will soon be released from detention, says Banji Akintoye