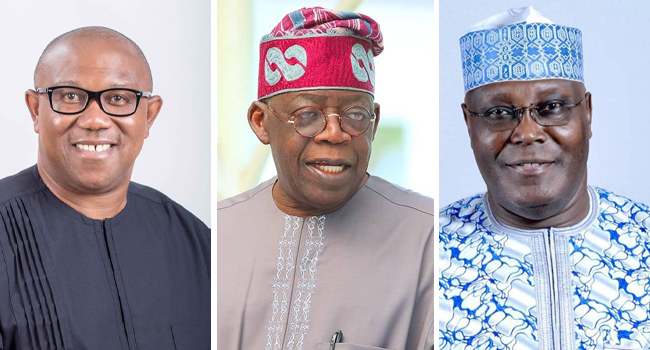 The presidential candidate of the All Progressives Congress (APC), Bola Tinubu, on Friday, mocked his counterpart of the Peoples Democratic Party (PDP), Atiku Abubakar over the latter’s multiple attempts to occupy the number one political office in the country.

Tinubu, who spoke at the APC Presidential Candidate Meeting with Niger Delta Stakeholders held in Gbaramatu, Delta State, addressed the Pere of Gbaramatu Kingdom, Oboro-Gbaraun II (Aketekpe, Agadagba) on his plans for the Gbaramatu community.

“You mentioned the issue of the deep sea port, the roads, the bridge, and the university, industrial park at Ogidigben. These are the things that came to your mind, Kabiyesi, and all of you here,” the former Lagos State governor said.#

Nigeria does not need people that lie with statistics but those who know the road, says APC presidential candidate Bola Tinubu. #CTVTweets pic.twitter.com/Kx0b5W2NM5

“Kabiyesi, Your Royal Highness, as I stand before you, there are few of us left running. One says he is Atiku. How many times has he been running? He’s always on the run and he’s tired. Tell him to go and sit down. Enough is enough.

“The other one, he think na statistic we go chop. He lies with arithmetic that no Indian can ever solve. To mention his name is a disgrace even to me. I won’t mention the name. Wrong arithmetic, wrong statistics, warehouse economics. That’s not what Nigeria needs.

“Kabiyesi, Your Royal Majesty, it was a joy to find one of my own blood being part of you from Badagry. So, what else do you need? You need honesty; you need the man who knows the road. That is me.”

Though Tinubu did not directly refer to Obi or the presidential candidate of the New Nigeria Peoples Party (NNPP), Rabiu Kwankwaso – two other major contenders in the 2023 elections – his comments were met with chants of “Jagaban! Jagaban!”

He assured the Pere that his administration would consult with the monarch regularly.

“Our brothers here, we will embrace them for the development of the area, the community of Gbaramatu, and other associated communities – economic development, progress, jobs for our youth, a promised tomorrow that is certain.

“A renewed hope is here standing before you. And I promise, with the support of God on my team that you will live long, you will live with prosperity,” Tinubu said.

2023: Nigerians are our structure – Labour Party

Rapist jailed for life in Jigawa

Nigeria at brink of avoidable catastrophe, restructuring only way out —Afenifere

I visited US to see my children, not for check-up –...