A 44-year-old artisan, Mustapha Abiodun, is currently cooling off inside one of the cells at the State Police Command, Ikeja for impregnating his teenage daughter in Alagbado area of Lagos.

The victim (names withheld) whose parents are divorced started living with her father two years ago when she was 14 years, but her father started abusing her sexually last June.

It was gathered that the first time Mustapha sexually abused his daughter, he apologised to the victim, saying he was under the influence of alcohol and promised it was never going to happen again.

Unfortunately, the sexual relationship between the duo led to the victim’s first pregnancy in August 2021. When the victim was four months pregnant her father procured an abortion for her in a nearby hospital in Yusuf area of Alagbado.

It was learned that after successfully procuring abortion for his daughter, Mustapha continued to have carnal knowledge of his daughter till she got pregnant again.

According to one of their neighbours (names withheld), Mustapha is very protective of his daughter, he forbids her from interacting with people living in the compound. Apart from when she goes to school or when he goes to work, they were always together. We didn’t know anything was happening between them till we began to notice changes in her body.”

According to the victim’s mother, “I separated from Mustapha when my daughter was three months old. She lived with me till two years back when she started saying she wants to see her father and I obliged. And she began to live with him in Lagos.

“A few weeks ago, I received a distress call from a relative that I should come and take my daughter back. When I came to Lagos, my daughter and her father had travelled to Abeokuta for a burial. When they returned I discovered my daughter was pregnant, so I got the police involved.”

Confirming the arrest, spokesperson of Lagos State police command, SP Benjamin Hundeyin, said the suspect was arrested on March 20, 2022 following the complaint by the victim’s mother. The case is currently being investigated by operatives at the Gender unit of the command. 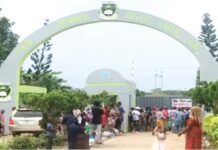 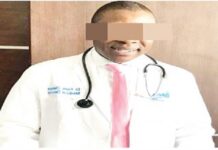 Ebube Agu Not After IPOB – Umahi

BREAKING: Bandits tricked us with fake repentance to get money for...