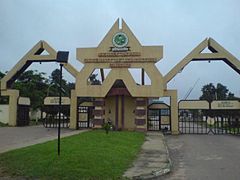 The process to produce a successor for the incumbent Vice Chancellor of the Michael Okpara University of Agriculture, Umudike (MOUAU), Prof. Francis Otunta whose tenure would elapse in February has commenced.

But not a few stakeholders are worried that the process which hitherto was thought to be foolproof and ironclad, now appears integrity-challenged and for many reasons, less than credible.

About 30 persons are gunning for the Vice Chancellorship position of the University, but recent developments in the University suggest that the selection process may be fraught with alleged political intrigues, influence-peddling, distrust, accusations and counter accusations.

A senior academic who confided in our correspondent lamented that members of council seem poised to violate an agreement between ASUU and federal government on the template that should be adopted for selection of Vice Chancellors which was communicated via a white paper. According to him, the white paper should guide the grading of the applicants for the position of the Vice Chancellor but that appears to have been jettisoned.

Though there have been a bandying of figures and scores around the university community, but feelers from impeccable quarters in the University community suggest that according to the screening done in accordance with the white paper, one Prof. Maduebibisi Iwe was said to have led the rest with about 92.35 points while his closest rival, Prof. Val Ekechukwu scored 88.93 points. Yet another score published in one of the major dailies (not Sunday Telegraph) credited Prof. Val Ekechukwu with 88.93 points while Prof. Maduebibisi Iwe got 88.35 points.

While sampling views on campus, multiple sources insisted that Prof. Iwe made the highest score and some went further to accuse members of council of allegedly ‘shifting the goal post in the middle of a match’, by introducing ICT as another item for screening in violation of the white paper.

They alleged that with that, Prof. Ekechukwu score was spiked while Prof. Iwe got less, after the actual grading had been concluded.

At this point a lot of stakeholders faulted the process and the outrage that followed the alleged dramatic turning of the table against Prof. Iwe resulted in demonstrations and protest marches in the University condemning what was widely described as an ‘abracadabra process’.

The selection process was supposed to have been concluded by Friday but in a twist of events, the Chairman of Council, Hon. Lawal Mohammed Zayyana left town and travelled back to Abuja claiming that he no longer felt safe in the University environment thereby further spiking the suspicion of foul play.

Consequently, the Deputy Registrar for Council Affairs, Mrs. U.O.K. Onuma sent out notices via text message that “the resumed meeting of the 27th Emergency Meeting of Council will hold Mon. 14-12-2020” at the University’s liaison office at Utako, Abuja.

What further stalled the process was the fact that two members representing the University Senate in the screening panel, Prof. Ekumankama and Prof. Nlewedim were said to have opposed and rejected the ‘strange item’ introduced in the scoring guideline for assessing the Vice Chancellorship applicants.

Our correspondent gathered further that without the two Professors who are members of the Senate accepting the grading as entered by the external members of the Governing Council who are supposedly politicians, the outcome of the exercise may remain void.

The protest march that followed the exercise was largely an expression of discontent by mainly indigenes of the state.

A middle-aged student who was part of the protest told our correspondent on the ground of anonymity that, “for about 15 years no professor from Abia state has been selected as Vice Chancellor of MOUAU and on the instant case where Prof. Iwe, an indigene is clearly the most qualified, why resort to strange manipulations to deny him the position. That is why we rose in protest.”

“The student who simply gave his name as Johnson (apparently, not his real name) continued: “And to make a bad situation worse, imagine the Chairman of Council who addressed protesters saying that ‘his hands are tied’; whatever that meant, it was a wrong choice of words. He should simply untie his hands and apply the stipulated due process in the selection of the next Vice Chancellor of the University to avoid plunging the institution into an avoidable conflict. In my opinion, when University managers learn to remove politics and politicians from University administration, processes like this will be seamless. Now we do not know if we are producing a Vice Chancellor for the academic community or a Vice Chancellor for a political party.”

Contacted, the spokesperson for the University, Mrs Adamma Nwachukwu acknowledged that “there was a bit of crisis” and that some members of the community had embarked on a protest march because they felt they may not get what they want from the process.

Nwachukwu however assured that everything was now under control, stressing however that, “the selection process is ongoing and nobody can thwart the process. It is a clear process and I can assure you, due process will definitely be followed and the best candidate will emerge.”

Fayemi: Buhari administration knows what to do to end insecurity in 17 months

Shasha Violence: Do Not Take Laws Into Your Hands, Akeredolu Tells Ibadan Residents