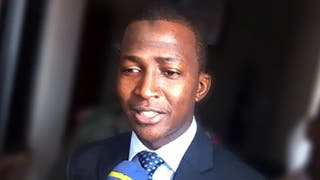 Three serving state governors are being monitored over their moves to launder stashed billions of naira through table payment of salaries to workers, Chairman of the Economic and Financial Crimes Commission (EFCC), Abdulrasheed Bawa, told Daily Trust in an exclusive iinterview on Thursday.

He said raid on Bureau De Change operators will be sustained, urging Nigerians to support the system, for the benefit of all.

Daily Trust reports that the Central Bank of Nigeria (CBN) had on October 26 announced that the country’s currency would be redesigned to address many issues that have negative effects on the economy.

While the re-designed notes would be released on December 15, Nigerians have up to January 31, 2023, to deposit the old notes in banks. However, the mad rush by top politicians, traders, investors and other members of the public to cut corners and convert stashed funds into dollars, property and others, has created tension in the economy.

CBN Governor, Godwin Emefiele, had said the move was to counter-terrorism financing and hoarding of banknotes by members of the public. The apex bank is to redesign the N200, N500 and N1, 000 notes.

Checks by this paper showed that a dollar was selling at N882 in Abuja on the black market yesterday, despite several raids by the operatives of the EFCC in Lagos, Kano and Abuja.

Sources told this paper that BDC operators are mopping up dollars from states as the scarcity of the currency bites harder.

In an exclusive interview with this paper yesterday, the EFFCC chairman disclosed that some governors are all out devising means to launder money they stashed in houses. He said so far, they are closely monitoring three of them.

Bawa, who refused to disclose the identity of the three governors, however, said two of them are from the North, while the 3rd one is from the southern part of the country.

He said intelligence at the disposal of the commission, showed that the three governors have concluded plans to inject the money into the system through table payment of their state workers’ salaries.

“Let me tell you something, the Intel that I have yesterday and I would want you to take this thing very seriously. Already, some state governors that have some of this cash stashed in various houses and the rest are now trying to pay salaries in cash in their state,” he said. Asked whether the commission would summon the governors, the EFCC chair said they are closely monitoring them.

He added that “I don’t know how they want to achieve that but we have to stop them from doing that. Well, we are working, they have not paid the salaries in cash yet but it is a very serious thing”, saying the move is against section 2 of the Money Laundering Prohibition Act.

“The law is very clear regarding cash transactions. Anybody that is to consummate any cash transaction as an individual, if it is not through a financial institution must not be above N5million and if it is above that it is criminal for you to engage in such transaction. And for corporate entities it is N10million.

“Yes, I agree the salaries are not up to that but why are you all of a sudden, and all along you have been paying people salaries through their bank accounts and now you want to pay them in cash, what are you trying to do? They will come under a lot of guises, they are trying to do verification of officers, that is what we have gotten,” he said.

Disposing of stashed funds through property

The EFCC boss also confirmed the mad rush by some people to dispose of their stashed funds by buying property.

“We are aware of that. Even if you dispose of your property and you receive cash, for that cash to be of value to you after January 31, 2023, you have to take it to the bank; so what happened, are you coming to the bank with those millions? That is why we are working with the bankers and if you have this information let us know about it,” he said.

Raids of BDCs to continue

He said the raids of BDC operators would continue. This he said, is very important to protect the system against the laundering of stashed funds.

“And based on the known gullibility of these people (BDCs), they are willing to accept this cash from the owners of these monies and they are willing to depart with the foreign currencies that they have and so that is why they are very important and very critical to us in this project that we said to ourselves that we are going to do,” he said. When Bawa’s attention was drawn to the fact that the dollar was rising despite the EFCC raids, he said it is a function of demand and supply.

“The truth of the matter here is just a simple function of demand and supply, people are rushing this commodity not that they are going to use it for any meaningful business engagement but they are just rushing for it, just a store of value, that is what is happening.

“And what they say in economics is the higher the demand, the higher the price; so people are just seeing USD or other hard currencies just the way that they are seeing gold, to get it exchanged and store their value,” he said.

Why I met chief compliance officers of banks

On why he met chief compliance officers of banks in Lagos recently, he said the parley was part of efforts to properly monitor the system and to seek their collaboration in respect of the likelihood of people bringing in their illegitimate funds back to the system.

“We knew a lot of people are hoarding these funds, it is with them and they will always find a way of trying to bring it back to the system.

“The owner of BDC must deposit the money he exchanged for the currency he did, the owner of real estate must also do the same and all of that. So, we sat down, we deliberated and we agreed on what to do. Everybody is happy about it,” he said.

No need for panic

He, however, urged Nigerians to be calm, saying “this (naira redesign) is just a routine thing that ordinarily CBN ought to have done after every eight years, the monies are going to be taken.

“All that the government is saying is come and deposit the money at no cost to you; that is just what is happening, nothing more than that. “How can you have an economy where you have 85 per cent of your currency out there when you are calling for a cashless society when we have a lot of means by which people can consummate their transactions? What are you hiding? These days, people hardly go to the banks, you can transfer your money here using your app, and you can transfer your money through ATM, POS, and all of that, so why keep the money? Why are you scared of going to the bank to say that you want to deposit your money? He queried.

Daily Trust reports that in the last few days, videos of stashed naira denominations being brought out are common on social media.

Also, BDC operators in Abuja, Kano and Lagos said they have run out of US dollars as a result of increased demand.

“We don’t have the dollars anymore even though the buyers are increasing in number. Some of them are willing to buy it at N900/1$,” one of the BDC operators at Zone 4, in Abuja, said.

Asked if they were being harassed by EFCC operators, he said, “Not really, of course, there was this fear when they first came but they later explained to us that they needed our support to track unpatriotic Nigerians who want to launder proceeds of corruption.”

Oil price plunges to $70 a barrel ahead of OPEC+ meeting

No Way’ Russia Would Invade Ukraine If I Was Still In...