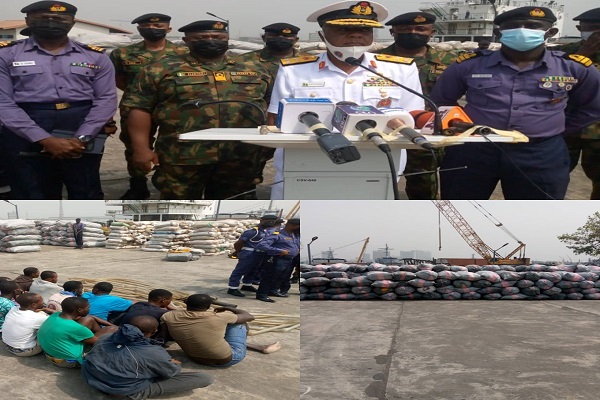 The Nigerian Navy on Thursday said it intercepted N10billion worth of cocaine last October 9 and 28.

Commander, Nigerian Navy Ship (NNS) BEECROFT, Rear Admiral Bashir Mohammed, also said the 261 bags of cannabis worth over N100 million in the local market were intercepted during the Yuletide.

He said 413 bags of foreign rice and over 150 drums of Premium Motor Spirit PMS being smuggled into the country during the Yuletide were also arrested.

He said: “We enjoyed a relatively peaceful yuletide season. –

“However, in the course of our patrols, the Navy intercepted and arrested some drug traffickers, smugglers of contraband items and petroleum products within the maritime environment.

“It is worthy to note that the suspected cannabis seized is worth over N100 in the local market.

“Pertinently, five crew were arrested on board the large boat and investigation revealed that they were all foreigners.

“It is equally worthy of note that the smuggled rice is worth over N13million in the local market and this is to the detriment of Nigeria’s local content drive.

“The suspects who are all foreigners are part of a syndicate who come to purchase stolen petroleum products to freight them to neighbouring countries for sale, to the detriment of the Nigerian economy.

“You may equally recall that NNS BEECROFT arrested MV Chayaree Naree and Karteria for trafficking of 32.9 and 13.65kg of cocaine on 9 and 28 October 21 respectively.

“The cocaine seized in both occasions were worth over N10 billion in the local market.

“These series of arrests reinforce the Nigerian Navy’s resolve of zero-tolerance to illegalities within the maritime domain in line with her constitutional mandate.

“Regardless of the festive season, the Navy did not relent in executing the mandate of the Chief of Naval Staff (CNS), Vice Admiral Awwal Gambo, which is geared towards curbing illegalities thereby boosting national prosperity.” 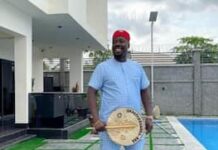 NDLEA Seizes Cocaine Worth Over N32bn At Lagos Port