The Chief Justice of Nigeria, Justice Tanko Muhammad, on Monday, admonished newly appointed judicial officers in the country to shun corrupt practices in the discharge of their adjudicatory duties.

The CJN gave the charge in his speech at the opening of the 2022 induction course for newly appointed judicial officers of superior courts held at the National Judicial Institute, Abuja.

He informed the fresh judges that the judiciary has no place for corruption, warning that anybody caught in the web of corruption would be severely dealt with.

“Distinguished participants, let me inform you, if you are not aware that corruption has no place in the judiciary.

“As judges, you are expected to display water tight integrity and be committed to your adjudicatory duties, thereby shying away from anything that might dent your integrity,” the CJN said.

He reminded the new judges that they needed to possess outstanding qualities which would set them apart distinctively from other members of the society.

“These indispensable attributes of judicial officers include integrity, impartiality, honesty, transparency and the fear of God, among others.

“This can be achieved by conforming to the Code of Conduct for judicial officers, as the conduct and ethics of a judicial officer is immensely important in order for the public not to lose confidence in the judge and by extension the judiciary as a whole,” he said.

Muhammad also enjoined the judicial officers to have a proper grasp of the law, practice and procedure in addition to mastering the art of judgment writing.

judiciary: An inconvenient manifesto
“You must also go the extra mile of having the law at your fingertips.

“A judicial officer who is not thoroughly abreast with the law is handicapped and at the mercy of not-too-faithful lawyers” the CJN stated.

Also speaking, the Administrator of National Judicial Institute, Justice Salisu Abdullahi (retd.), hinted to the participants that as ministers in the Temple of Justice, the need for them to imbibe judicial values could not be overemphasised.

“Your job as a judicial officer is quite tasking and demanding. It involves long working hours, as such, it behoves on you to strike a balance in handling your day to day activities on the Bench and other affairs that will compete for your time and attention,” he said.

However, Justice Abdullahi said the duties of judicial officers as prescribed by law, should always take precedence over all other duties and responsibilities.

“Your status as judicial officers demands that you must be courageous, fearless, candid, uncompromising and firm in upholding the rule of law as you strive to attain judicial excellence at all times, as it goes without saying that the exercise of judicial discretion should be done judicially and judiciously”, the administrator stated. 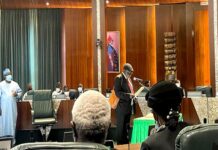 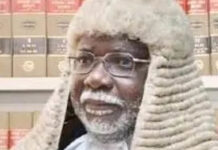 Nigerians cry out to Buhari over high cost of cooking gas