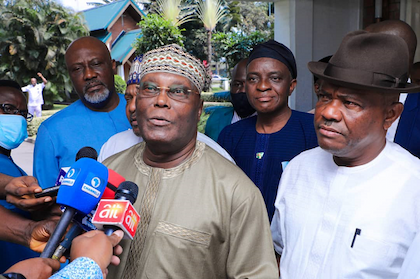 As part of efforts to resolve the lingering crisis in the main opposition Peoples Democratic Party (PDP), the Presidential Candidate of the party, Atiku Abubakar, has again met with Governor Nyesom Wike of Rivers State.

A source privy to the meeting told Daily Trust that some top aides of the duo attended the meeting.

The visit took place at the Asokoro Rivers Governors lodge in Abuja on Thursday afternoon.

The source said many of those that followed Atiku to the meeting where not happy with the manner Wike confronted Atiku on some of the issues causing the crisis in the party.

The source, who did not want his name mentioned because he was not authorised to speak, said Atiku, who opened the discussion, urged Wike to return to the fold and let them work together to resolve the issues.

He said the presidential candidate appealed to Wike that Nigerians need the PDP to win the 2023 election and gave reasons why Wike should put an end to the crisis.

The source said: “But we were shocked the way Wike reacted. The Governor reminded Atiku about their London meeting and the agreement reached. The promise by Atiku that he was going to speak with the National Chairman Dr Iyorchia Ayu to resign.

“The promise that he (Atiku) will get back to them after a week and how he has not called them since that time.”

The Chieftain also said, according to Wike, the BoT members agreed that Ayu should go, but some people were urging him on not to resign.

However, after listening to Atiku, Wike promised to get back to his people, discuss with them on the outcome of the meeting before taking any decision.

Meanwhile , a source in the Wike camp said it is difficult to reach an agreement on view of the serial betrayal and broken promises suffered by their camp.

2023: Results will be transmitted in real-time to viewing Portal on election day –...

Lagos re-arraigns Evans, others for kidnapping

Some northerners made it difficult for Jonathan to defeat Boko Haram...