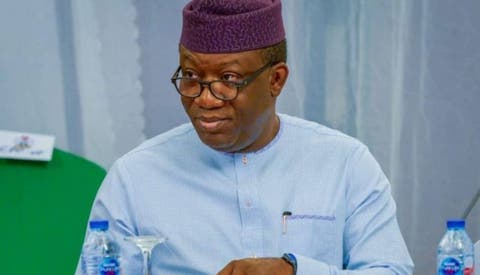 Ekiti State Governor, Dr. Kayode Fayemi has said those agitating for the dismemberment of Nigeria were probably frustrated by the situation in the country.

The governor agitated for the removal of a uniform wage structure from the exclusive legislative list.

Speaking during a television programme monitored in Abuja on Tuesday, Fayemi who is also Chairman of Nigeria Governors’ Forum said “frankly, some of the people who are talking about secession are doing so out of frustration but I don’t think that is the solution to Nigeria’s predicament.

“I have unfailing optimism that in spite of all our challenges, this country will triumph and survive current challenges. We as leaders must focus on the role of protecting lives and property and focus on safety and security as the primary responsibility that we have.”

Nonetheless, the governor advocated for a restructuring of the country as a way out of the current quagmire insisting that to make life better for Nigerians, “we must deal with the structure of the country.”

He said: “I have been on record several times on matters of security that and matters of economic development, we may need to look at other ways of managing diversity and difference in our country and that devolution of power is an idea which time has come.

“We should reduce the number of items we have on our exclusive list and devolve them to state and local authorities.

“The first among them is internal security because we need multi-level policing. Nigeria is the only federation with a unitary policing system.”

Speaking on the vexed issue of moving the power to determine minimum wage from exclusive to the concurrent legislative list. The governor said it was the right thing to do.

“Governors are saying that if we want to carry restructuring to its logical conclusion, then we should not have a national minimum wage.

“They are not stopping at that; they are saying that all wage structures that are uniformly defined nationally are problematic.

When reminded that restructuring was a campaign promise of the ruling All Progressive Party (APC) to which he belonged, Fayemi said having submitted its report to National Assembly on the matter, it was now left for legislators to do what was right.

Osinbajo: I’m completely convinced that Nigeria has a bright future

Another Strike Looms As ASUU Issues Three-Week Ultimatum To FG

Nigeria to be net exporter of petroleum products by 2022 —...

FREDERICK NWABYFO: Eviction orders here and there will make us refugees...