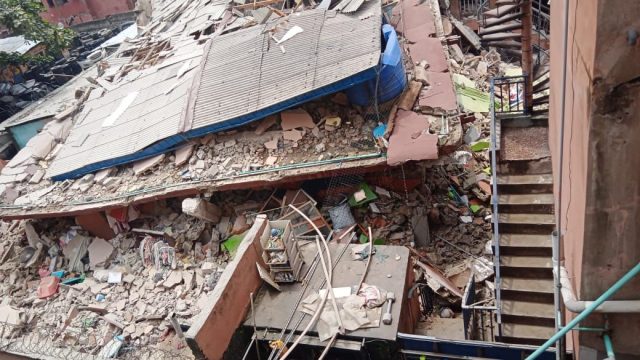 The incident, according to an eyewitness, happened around mid-day amid rainstorm.

However, men of the Lagos State Emergency Management Agency, LASEMA, and Lagos State Rescue and Fire Service, Nigeria Police, among others, raced to the scene on rescue victims mission.

According to Permanent Secretary, LASEMA, Dr. Femi Oke-Osanyitolu,
further investigation revealed that the collapsed building was an adjoining building to another three storey building.

“Four people who were trapped inside the building were rescued and treated. However, we were informed two females that are occupant of the building are still missing as of press time, 2pm,” Oke-Osanyitolu stated.

However, when the rescue team got to the scene there were visible cracks on the remaining standing building that needed urgent attention.

Also, search and rescue operation were still ongoing as of 2 pm by rescue team, while the buildings were cordoned off and occupants evacuated.

According to eyewitness, Mr. Tunde Ariyo, “an adult and a child were initially rescued alive, three persons are still missing in the rubble and they could be dead or alive by now.”

It was gathered that sympathisers and first aid workers rescued the survivors before the arrival of emergency responders.

While reacting to the unfortunate incident, Commissioner for Physical Planning and Urban Development, Engr. Omotayo Bamgbose-Martins, said the state Government has directed the prompt investigation to unravel the immediate and remote cause(s) of the collapse.

Bamgbose-Martins, who spoke at the site of the collapse, said that collapse which occurred midday on Friday was a partial collapse of a building that is over 40 years old.

He said, while moves were on to determine the cause of the collapse, he directed that the adjoining building be pulled down for safety reasons to avert secondary danger.

Bamgbose-Martins, expressed regret over the occurrence, saying that “effort is on to pull out those that might be trapped in the rubble.”

He added that “the Lagos State Building Control Agency, LASBCA, and the Lagos State Materials Testing Laboratory have been directed to swing into action to unravel the cause of the collapse while the Lagos State Emergency Management Agency have since comenced rescue operations.”

The commissioner, therefore, commiserated with the residents, occupants and neighbourhood, assuring of government’s commitment to forestall similar incidents in the future.

Outrage as stepmother inflicts stepson with burns from hot knife