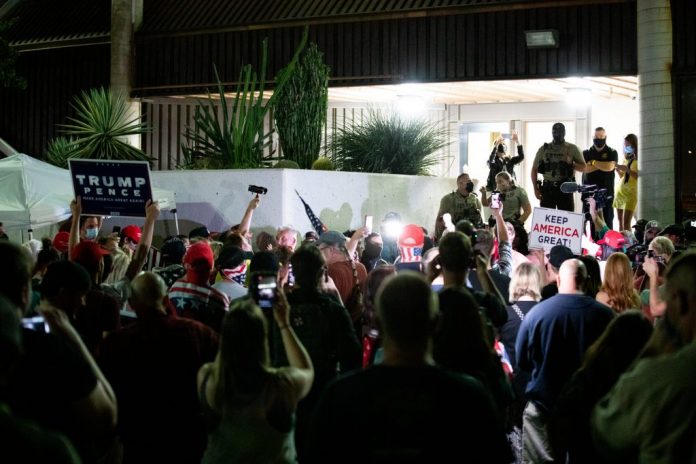 Supporters of United States President , Donald Trump, some of whom are suspected to be armed , have surrounded Maricopa County Election Department, Arizona , protesting the election .

A video of the protest broadcast on CNN, showed many of the protesters carrying Trump banners and placards , expressing their frustration over a projection by a cable network that the Democratic party would win the state’ s 11 electoral college votes .

Former Vice- President Joe Biden , who is the Democratic candidate, is currently leading the race in Arizona albeit by a small percentage .

Trump’ s campaign on election night disputed the calls that they lost the state, citing the outstanding amount of mail -in ballots that had yet to be counted.

“ Who ’ s checking the mail -in votes?” a protester on Wednesday night could be heard saying over a loudspeaker , according to footage posted to Twitter by NBC News correspondent Gadi Schwartz.

“ Democrats , ” a woman answers.
“ Democrats are
checking them . ”
With 86 percent of the state reporting, Trump trailed Biden by just shy of 80, 000 votes , according to The Associated Press.

As of late Wednesday night , the state was still tabulating more than 300, 000 ballots , The
Washington Post reported .

Trump had taken to social media on Wednesday claiming victory in the election and accusing the Democratic Party of trying to steal votes.

Joe Biden, the Democratic candidate for the U.S. President, has launched an official transition website, www.buildbackbetter.com.

The move comes as votes are still being counted in many states and the presidential race still undecided.

On the website is a short statement that reiterates Biden’s earlier assertion that it is the American people that will decide who becomes the next U.S. president.

“Votes are still being counted in several states around the country.

“The crises facing the country are severe — from a pandemic to an economic recession, climate change to racial injustice.

“The transition team will continue preparing at full speed so that the Biden‑Harris Administration can hit the ground running on Day One,” the statement says.

Earlier in a speech, Biden, who is also a former U.S. Vice President, said it was clear that he had won “enough states to reach 270 electoral votes to win the presidency”.

“I’m not here to declare that we’ve won, but I am here to report when the count is finished, we believe we will be the winners,” he said.

The observers from Organization for Security and Cooperation in Europe invited by the State Department have tracked U.S. elections for nearly two decades.

The group monitored election in 30 states. Members of the group who visited post offices said they found nothing untoward in the handling of mail-in ballots.

In their interim report, the group listed the challenges which characterized the 2020 U.S. election, citing allegation of fraud without evidence by Trump as top of the pack.

Also, Urszula Gacek, a former Polish diplomat who heads the OSCE mission, said Trump has no solid ground to make the allegation of fraud. “The system has held up well,” she said at a news conference in Washington on Wednesday.

“Given the extreme stress test the system was exposed to … the American electoral process appears to have passed that test,” Gacek said.

“The enormous effort made by election workers, supported by many engaged citizens, ensured that voters could cast their votes despite legal and technical challenges and deliberate attempts by the incumbent president to weaken confidence in the election process,” said Gacek.

Religious crimes’ that put Nigeria on violators’ list still persist, CAN tells US

Electoral Act: Your Election Can Be Annulled, Gbajabiamila Tells Appointees Yet To Resign